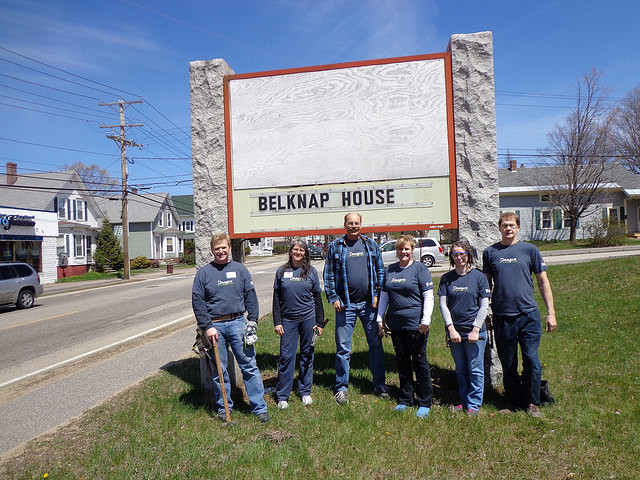 AFL Supports the Homeless for Annual Month of Service

Each year, AFL team members take part in AFL’s Worldwide Month of Service, engaging in projects that support our local communities and invest in the future. This year, AFL’s Test and Inspection Division chose to help the homeless in their local communities.

Homelessness is an issue that is becoming an increasing problem across the U.S. According to the U.S. Department of Housing and Urban Development (HUD), more than 500,000 people are homeless in the U.S. A quarter of those people are children. Finding affordable housing is becoming more difficult for low income families, leaving people without many options.

AFL Test and Inspection has offices in Belmont, NH, and Lowell, MA. The team chose to volunteer at two organizations serving the homeless in their local communities: The Lowell Transitional Living Center (LTLC) in Lowell, MA, and The Belknap House in Laconia, NH.

The team who volunteered at the LTLC spent time organizing donated clothing for the homeless. The LTLC provides shelter to 90 people in transition and provides emergency shelter for 60-75 additional homeless people each night in the winter. The ultimate goal of the center is to find permanent housing for individuals and families. Social workers at the center say that finding affordable housing in the area is a struggle. In addition to providing shelter, the center provides more than 300 meals per day to people in the shelter and anyone in the community who is in need. The center also provides case management and health services. The donated clothing helps those living in the shelter and those who come in off of the street.

The Belknap House is a 6 bedroom homeless shelter in Laconia, NH, that is scheduled to open in October 2016. Prior to opening, the house requires renovation and safety upgrades. The Belknap House's mission is to provide families in the area a safe shelter especially in the cold winter months, when children are at risk, and to empower families to become self-sufficient by providing educational opportunities and other resources.

A couple of teams from AFL’s Belmont office spent two days helping with renovations at the house. The first day, the crew removed carpeting, ceiling tiles, a partial wall, and sheet rock. They also performed outdoor clean-up. The second day, the crew raked leaves, removed doors, demolished walls, and finished removing carpets and ceiling tiles. Thank you to all the AFL associates who gave their time during the Month of Service. Below are some more pictures from the groups who volunteered at the LTLC and the Belknap House.